Although there are a plethora of Halloween-oriented events this coming weekend, you may be interested in enjoying some of the other pleasures of the season too, including the Railhawks Soktoberfest, Guy Fawkes Night at Oxford Raleigh, and a Chili Cook-Off in Fuquay-Varina. And here are a couple of great guides for the extensive Halloween activities to choose from too: IndyWeek’s guide to Halloween and WRAL Out and About Halloween Events.

The third annual RailHawks Homebrew Soktoberfest will be presented by Lonerider Brewing Co. and Chef’s Academy this Saturday, November 1st, at the WakeMed Soccer Park. Pre-game festivities start at 5:30 with the Regular Season finale against Minnesota United FC starting at 7:30. Tickets to Soktoberfest start at $10 (free for 2015 Season Ticket purchasers) and include access to the Lonerider beer caddy, Crown Royal sampling, home-brew sampling from over 20 home brewers, and a vote in the home-brew competition. Winner of the home-brew competition will win the title of Homebrew Master along with a bevy of beer-centric benefits. Live local music will also be on the stage during the event and you can also purchase Soktoberfest Flex Packs that include tickets to the game. 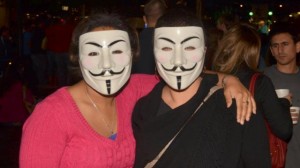 Guy Fawkes Night at the Oxford

Taking place on Saturday, November 1st, the 5th annual Guy Fawkes Night celebrates the 1605 event of King James I surviving an attempted assassination attempt. A British tradition, it is usually a huge social gathering with bonfires and festivities, and the Oxford in downtown Raleigh is bringing that celebratory spirit to the US with this event. Free and open to the public, the festival will have live bands and food available from a few food trucks as well as craft brews from Fortnight Brewing. And of course, fire-inspired activities will be prevalent – from fire dancers and fire breathers to a custom made Guy Fawkes fire statue.

Sponsored by the Fuquay-Varina Chamber of Commerce, the Downtown Chili Cook-Off features 25 individuals, businesses, and non-profit groups showing off their cooking prowess and competing for coveted cash prizes. All awards are voted on by the public and the event runs from 10:30 – 3:30 on Saturday November 1st or until they run out of chili, so it is highly suggested to arrive before 1pm if you want to taste all the chili. A $6 ticket allows you to sample all the goods and vote for your favorite. All proceeds from the tasty event will benefit revitalization efforts in Historic Downtown Fuquay-Varina. Bring your tastebuds!