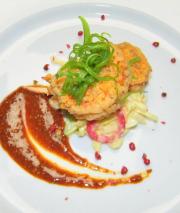 Image from the Il Palio vs Jujube competition dinner

Ever watched any of the Iron Chef shows, the popular TV programs where chefs compete against a resident ‘Iron Chef’ using a themed ingredient?  Well North Carolina seems to have created a similar regional version in the Competition Dining Series that is rotating throughout the state. Held early this year was Fire-on-the-Rock, held in Blowing Rock, NC and Fire-on-the-Dock, held in Wilmington, NC. Each competition features two different local restaurant chefs serving three courses each created around a featured NC ingredient. The twist is that anyone who purchases a ticket gets to be the judge – rating each dish to decide which chef moves to the next round. Amazingly, tickets are only $49 (excluding beverages and tax) for the beginning rounds, and $59 (excluding beverages and tax) for the semifinal and final rounds.

Fire-in-the-Triangle, held in Raleigh, NC, will be finishing up this month and is unfortunately completely sold out! But Fire-in-the-Triad, held in Greensboro, NC, will start in August. In addition, the results from each round and tantalizing pictures of the dishes are posted online. The website and competition are a must-check-out for any foodie or local restaurant lover.